Мамзелька: женские истории, отношения, мода и рецепты
Домой Uncategorized Cat Goes To His ‘Favorite Place’ At 7am Every Day And The...

One day, a teacher, Tina Soucy, was moving into her classroom on the bottom floor. It was her first day there at Westbrook High School. She saw a cat sitting outside and decided to let the ginger cat inside her classroom at 7 a.m. But it didn’t stop there.

The cat, Simba, began to arrive there every day at the same time. More than ten years have passed, and Simba has never been tardy in all that time.

Simba’s owner is well aware of where the cat goes since they do live close to the school. School officials also take care to be aware of potential allergies, as well as where the cat is at all times.

Simba is fifteen years old and very cuddly. Everyone at the high school loves having him there. He’s a little cat among about 800 high school students, but he’s not shy or intimidated.

He is known for sitting on students’ textbooks and lying around. He intrudes in their school lives in his small ways, but the teachers and students don’t view him as a negative part of their classroom. Anyone there will agree that he is a welcome intrusion into what could be a boring place! 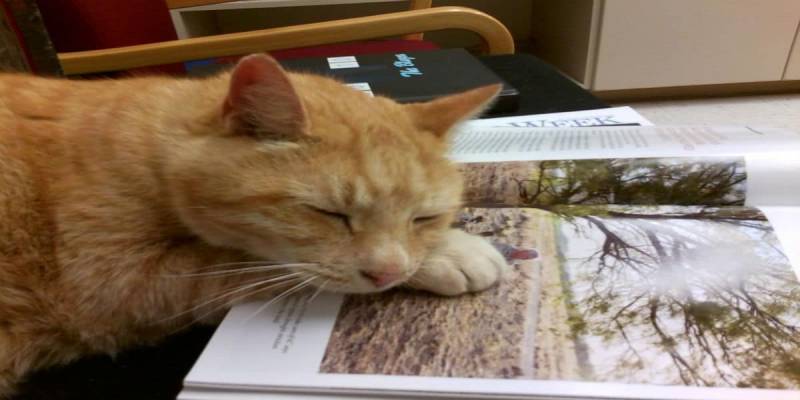 Surprisingly, Simba has the freedom to roam the halls and classrooms to go where he pleases. The Westbrook Superintendent doesn’t mind the cat’s presence and thinks that Simba can help keep students calm.

Simba seems to lighten everyone’s day when he comes through. He has made such a positive impact on the school that the school put on an art show inspired by him. It honors Simba and his owner and paints Simba in the students’ favorite way.

Westbrook Art Director Carol Connor said that she’s such an emotional connection and care about this cat.

No one knows how long Simba will continue to come around, but they know that it won’t end as long as he’s able to be there.