A man and woman were on a car ride on a rainy afternoon, nothing short of normal for them. While driving, they spotted a large Pitbull walking alone in the rain. They noticed that he did have a blue collar, but it didn’t seem that his owners were around.

The man in the vehicle gives the lonely pup pets and rubs. It seems like a regular sort of encounter with a dog. Then he asks the dog if he wants something to eat.

Well, then the dog leaps right into their car! How’s that for an answer? He already had his paws up on the edge of the car, where the window was rolled down. So why not? He pushes himself up through the window’s space!

He hovers over the steering wheel’s console, perhaps unsure of where to go from there.

Pitbulls are big dogs, and the driver, who recorded the encounter, opened his door and left the seat to make easier room for his new friend. The dog makes himself comfortable in the passenger seat on some sort of pink fabric.

It’s not an easy thing to anticipate, either. Most people don’t view Pitbulls positively, so some might be terrified from this encounter.

However, this Pitbull is quite friendly and just looking for something to eat. It’s doubtful that he’d be there for nefarious reasons. 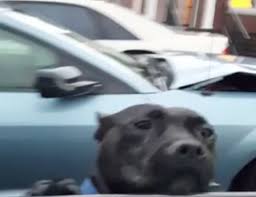 The Pitbull sits calmly inside the vehicle, with the man and woman now outside. They scream, but in laughter and surprised delight.

The dog seems pretty pleased with himself, but likely wonders where his food is. He looks back at the camera, sweetly, a look that’s hard to refuse. The man may as well have promised it to him!

There’s no clear idea if he was fed, but I think it’s safe to say he at least made some new friends.