Reunions, most of the time, are wonderful occasions. That holds true in the animal kingdom as well as for humans. Reuniting, while awesome, can also be incredibly emotional. Again, that is no less true for our furry friends, than it is for us. Just take this little monkey, for example. He is so excited to see his old caretaker that he spit out his drink.

We have all seen a spit take in our favorite comedies. While they are less frequent in real life, especially when it comes to animals, they do happen. Now and then, we are lucky enough to capture hilarious moments like these on video.

I want you to meet Limbani. Limbani is a rescued chimpanzee who had pneumonia when he was born. Unfortunately, since he was sick, his mama rejected him.

Luckily, A couple adopted Limbani, and with the help and guidance of the Zoological Wildlife Foundation, they managed to nurse him back to health.

“The pure excitement and joy when Limbani sees our close friends can only be appreciated if watched and heard,” wrote the Zoological Wildlife Foundation on Facebook. 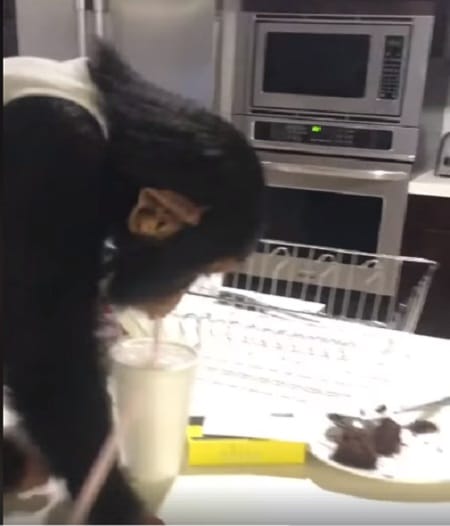 Limabani was enjoying a quiet evening at home when his former caretaker showed up for a visit. He had just taken a sip out of a drink on the counter when you can hear someone enter the room.

Tania and Jorge, the couple that adopted Limbani, no longer take care of him full-time. Clearly, though, that doesn’t make Limbani love them any less. There’s no denying his response when he hears Jorge’s voice.

ЧИТАТЬ ТАКЖЕ:  10+ Pictures Of Pets Who Make Themselves At Home Anywhere 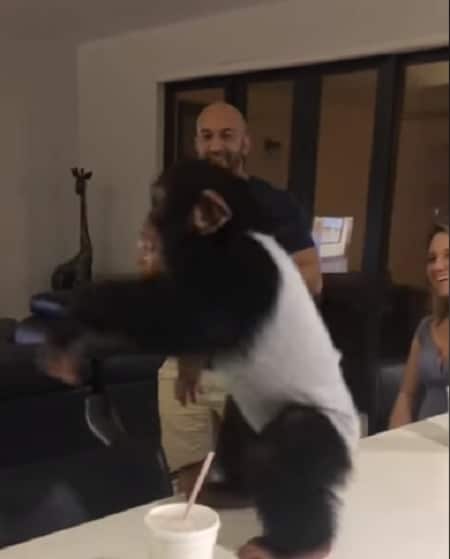 Limbani, forgetting all about his drink and the fact that he has a mouthful of it unabashedly jumped for joy. In the process, hilariously spitting out what was in his mouth.

“Tania and her husband, Jorge, who helped us raise and take on full around the clock care for the first few months of his life,” wrote the wildlife foundation on Facebook. “Limbani, who was born with pneumonia intervention and modern medicine, he wouldn’t be here today. Tania and Jorge can go without seeing him for a couple months and his reaction is always the same.” 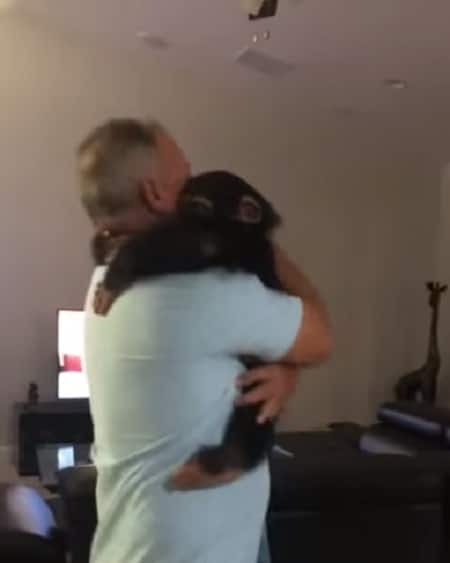 Even better than the spit take is the glorious hug at the end. The love between Jorge and Limbani is undeniable. Thankfully, someone was there to capture the whole thing.

Share this video with your friends for a good laugh. What’s your favorite movie moment with a spit take? Tell us about it in the comments.

Watch the adorable video below.

The pure excitement and joy when Limbani sees our close friends can only be appreciated if watched and heard. @misstyflower and her husband,Jorge, who helped us raise and take on full around the clock care for the first few months of his life. Limbani, who was born with pneumonia was rejected by the mother. Without human intervention and modern medicine he wouldn’t been here today. Tania and Jorge can go without seeing him for a couple months and his reaction is always the same. Limbani by far is the most loved of the entire ZWF family🖤#humanlike #almosthuman #limbani #criticallyendangered #ape #intelligence #enrichment #nature_perfection #notpets #zwfmiami #zwf @limbanizwf