Cats versus dogs is a long-standing fight. These cats are bringing the stand-off straight home and are sleeping in the dogs’ beds. 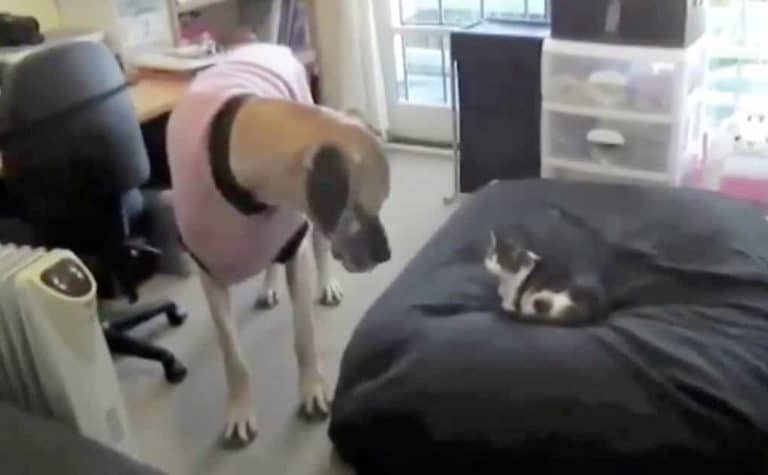 Dogs are no pushovers either—for the most part. They will defend their territory at all costs. But how will they respond from their beds being taken from them?

This video compilation gives you a pretty good idea of this conflict and leave you in stitches!

The first video starts with the cat in the dog’s bed, as promised. Their owner asks the dog what the problem is and tells him to go lay down in the bed. The dog can’t seem to though! He approaches the bed, but looks back to his owner for help. Like, mom, there’s a cat in my spot!

It doesn’t end there though. There’s nearly three minutes of these shameless cats taking beds, and sometimes kicking butt! One cat kicks a dog away when he tries to confront it about the bed snatching!

The cats know what they’re doing, too. Some sprawl straight out, making it clear that they’re comfortable and that the bed is theirs.

In their own act of defiance, some dogs just sleep in the cats’ beds. That doesn’t work out so well, though—there’s kind of a size difference that doesn’t work out in the dogs’ favor too well. They’re overflowing in the bed, and really just over the bed, rather than in it.

More owners encourage their dogs to take their beds back, but the dogs are a little cowardly.

Not all of them, though—quite a few dogs drag the bed around, cat included. They hope to throw the cat out of the bed, whipping their heads while gripping the beds.

Sadly, to no avail.

If you’re starting to think that all this means cats and dogs will never get along, don’t be too discouraged. There are a couple of sweet moments of dogs cuddling up to the cats in their beds. There is hope yet!